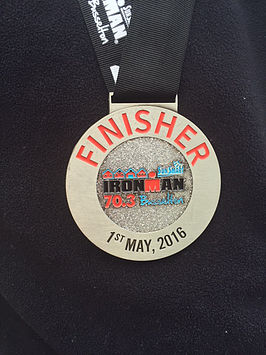 The goal was to qualify for the Sunshine Coast World Champs, so a good finish would have been in order. Unfortunately no running for several months put a stop to that goal. So the second target was to bike hard and thanks to Coach Boyd of TSO, we achieved this.

Registration was complete Friday arvo and the kids were looking at eating some ‘super-food’ for their race Saturday morning. So back down to Barnard Park, the kids were registered and off they went – the best thing with them ‘racing’ is how they enjoyed it. I returned later with my bike to check in and Dillan helped me. He seemed more mesmerised than me with 1900 bikes lined up. The bike was checked in, nothing left to do now so we just ambled home.

Race day… 4:20am start, breakfast, drinks and set off in the car. Pleasingly it was nothing like as cold as previous years. Things ran smoothly in transition and I was done by about 5:40am. The trouble is you always think you have more time than you do, by the time I dropped my bag, did a short warm-up and put the wetsuit on, it was an hour later and my wave were setting off behind the pro’s at 07:12 I walked to the beach, the atmosphere and buzz is awesome, they played the National Anthem and off I went for my warm up swim.

As soon as my head hit the water all I thought was ‘far-out my heads cold, how did the kids do this yesterday with no wetsuit!!’ A short swim and I saw my age lining up so I headed to the timing mat you have to pass through before the start and heard some cow bells being shaken….Emma, the kids and her parents had made it to the start so I gave them a wave and carried on. I always try and line up straight to the furthest buoy and hone in on this.

The gun went and we were under way. I noticed one guy to my right with another swimmer to his right and one just behind them so I moved over to swim with them. We settled into a steady pace but I noticed we were going too far right so I headed left on my own, I just beat them to the first right turn and we swam together as a group. The water was flat and we held our positions and exited as a group of four into transition together.

My official position was 3rd. I decided not to go with the arm-warmers, had a quick drink and straight out onto the bike, leading the group and did this for about 10-15km’s before Gary Couanis pulled up asked if this was the front and then pushed on. He won the overall age group. I held some distance from him to not pick up a drafting penalty and then took the lead and we kept doing this until the half-way point where he took a wrong turn. I shouted out to him and saw him slowly turning. Emma and the kids were screaming and shouting and I could recognise the surprise in her voice ‘oh he’s there, there he is…Go Stephen’.

Onto lap two and one of our age group athletes went past like we weren’t moving and I messed up a drinks station and didn’t see him again. The second lap was busy and some people were struggling riding in large groups. I got into transition 4th overall, quickly changed into my runners and felt pretty good apart from somewhat horrible stomach cramps as I carried on the support crew were screaming and shouting away.

The first lap of the run was fairly uncomfortable with the stomach but the pace wasn’t too bad and I’d moved up into 3rd overall. To the half-way point of the run course and I was still holding 3rd…just. Then the wheels started to come off and the lack of running really hit home, the pace went out the window but it came back to two things to do – 1) Stop 2) Carry-on. I continued.

As I came down the last 500m the support crew had gone, they repositioned themselves in the finish chute. I was going to give them a kiss but I was petrified of stopping as Emma was screaming run, go, keep going so high-fives were the way forward. I had a quick look at the finish time as I crossed the line and worked out I’d raced around 4:22:28 with a 1 hour 35 minute half-marathon so I was stoked.

I went straight to see the support crew and they were all so excited, Dillan was more excited about the Westpac chopper landing and taking off but hey it was a great day and you can’t complain with 13th in my age group and a PB.

So if you’re training for a triathlon or to get fit or not sure how to get into all these running events injury free then head in to see Steve our expert state champ physio who knows what he is talking about! Call (08) 9562 8100 or book online today.