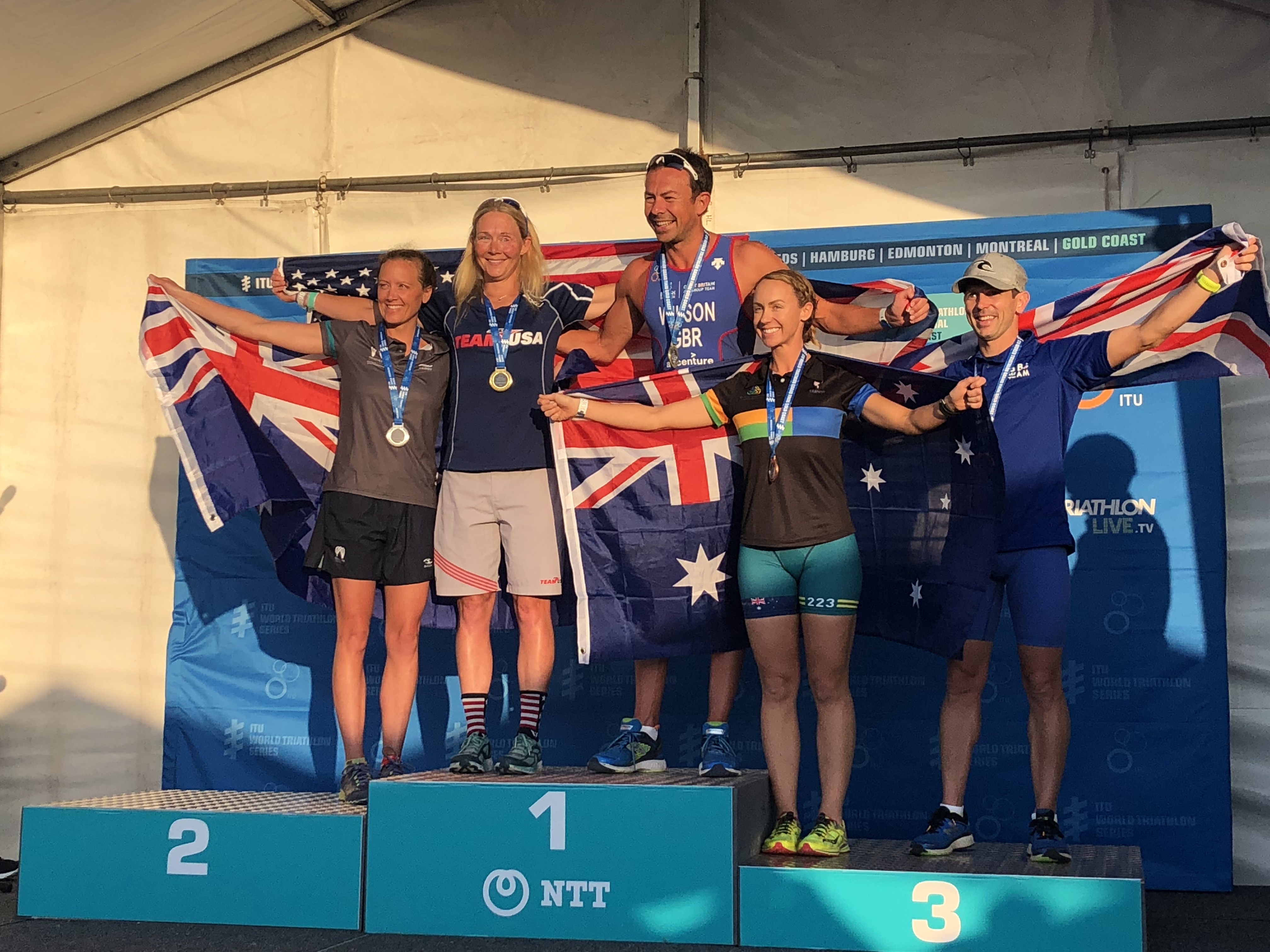 One year ago I was staring down the barrel of a fully ruptured ACL (anterior cruciate ligament) and medial meniscus, through hard work, determination and treatment with Justin and Kieran I got myself into shape to qualify for the World Champs that took place last week on the Gold Coast.

I contacted my old coach and he put a plan in place and I stuck to it as best I could.

Sadly the last week and a half were tough as I fell ill and was on antibiotics. We also suffered a close family bereavement, which was hard to deal with but we made it to the Gold Coast.

We arrived Sunday and made our way to the apartment, I went for a slow jog, there were people training everywhere, even some idiots cycling with no lights!!

Monday rolled around and I got up early and headed to the Commonwealth Games Aquatic Centre – far out, amazing place and if I wasn’t already nervous I was then. People were racing up and down. One French guy ran along pool-side and then jumped in and started sprinting, I thought you can have that, I’ll just stick to my plan!! Swim done, back to the apartment and we headed off to Movie World with the kids, via Giant Nerang – recommended by Giant Ocean Keys (Ocean Keys Cycles). Lot’s of walking and fun, we had a blast at the park. Best ride?? Superman ride.

Tuesday came around, again, I got up early and completed the bike course with the GB team (sorry folks, I was racing for GB!!). There were heaps of nations out doing the same. The course was slightly technical in the early stages but then just straight out and back, one lap – 20km. I liked a team in a colourful green kit – it was the Mexicans. I headed home, had some breakie and then we took the eldest 3 for surf lessons, Dillan didn’t want to surf so he opted for a bucket and spade!! The kids had a blast. We met old uni friends (racing for GB), which was great to catch up. In the afternoon, I had a team meeting/briefing. The best part of this meeting was at the beginning – the team managers said “you may have a question, if you do have a question and it is applicable to EVERYONE in the room, I mean EVERYONE in the room then ask it, otherwise speak to me after”!! Best part – no stupid questions!!

Wednesday came, I was meeting my Coach Boyd for a bike recce again and then completed a swim familiarisation (we swam the course) and then I did a little jog of what I thought the race course was with our eldest son George. It was time to rack the bike and we heard reports of two hour wait times!! So my loving wife, Emma stood in the queue with my bike so I didn’t have to stand for hours, what a legend. So I took off, the kids played handball and I watched the aquathlon event going ahead as Louise (our uni friend was racing).

Later Wednesday evening we had a parade of nations and opening ceremony. This was a fantastic event that saw all nations introduced and the number of representatives in total. Obviously the Aussies had a huge contingent!!

RACE DAY – Thursday morning, my race was at 12:50, I woke up just after 5. I tired to stay as calm as I could but that wasn’t really happening, I was a bag of nerves. I wasn’t sure why I was so nervous, I had no expectations of finishing position, to be honest I just didn’t want to look out of place.

I watched the earlier waves going off, it looked like a mad race to the first bouy of the swim. We were marshalled up to a holding pen and after 10 to 15 minutes we were ushered down to the start line. There was lots of hustling and pushing and we hadn’t even started. The siren went and we were away. Because of my height, or lack of I started in knee depth water and just started sprinting as hard as I could trying to get some clear water in front. This wasn’t happening and there were arms and legs everywhere!! After around 50-100m I had a huge hand grab the back of my wettie, arm over my back and pulling me down under the water and finishing off with a clump to the back of my head!! I thought to myself stay relaxed, it’s going to be hard just do the best you can. I got round the first bouy and thankfully found some water to swim in away from trouble.

I got out the water not knowing where I was other than on my own and got onto the bike as quick as I could, I started pedalling watching behind me and waited for them to catch me up. I started working with two Aussies and a Mexican in our group and we took turns all the way around the course until around 3/4 km’s to go when a large group caught us. I have never had such a frantic dismount getting off the bike and running into transition. There must have been about 10 or so of us all trying to get to the front. It was exhilarating.

I got the bike back and started running, out of transition a large group of us left at the same time, a big Aussie just absolutely took off and still not sure what position i was in, it was head down and run!! Screams of go Stephen, come on Stephen and cow bells sounding was just what I needed.

The run was two laps, on the way back on my first lap, Louise told me I was 60m off the podium, I could’nt believe it. I turned and headed out for the second lap into the headwind and thought ‘wow I must be top ten’. The second lap was hard, I caught eye of one of the Aussie’s in front of me from the bike that we cycled with and in the home straight just absolutely went for it, pipping him on the line. I was ecstatic, top 10 I thought. I was so happy, I was hi-fiving George, cuddling Emma and the kids. Emma screamed to me – you came third, you came third!! I couldn’t believe it. I thought no way, lets just wait for the results to be finalised. I checked, double checked and asked officials – 3rd it was!!!

We waited around for the medal ceremony and it was fantastic, an incredible, surreal experience that was beyond our wildest dreams!! We just could not believe it. Without the support of Emma and the kids, none of this would have been possible. I am so made up.